The Périgord/Dordogne is the land of 1001 castles, and this part has its fair share, with great examples from over the centuries. Take a gabare trip to view the landscape from the Dordogne river or stroll the 'hanging gardens' with stunning vistas from the mountain top.

The Périgord is divided into four distinct areas: Noir (Black), Blanc (White), Vert (Green) and Pourpre (Purple). The area is noted for its cuisine du terroir, with products related to ducks and geese, such as foie gras. Due to its relief and poor soils the Périgord noir has supported a system of mixed agriculture, which is based on many small holders creating a pleasant landscape at a human scale. 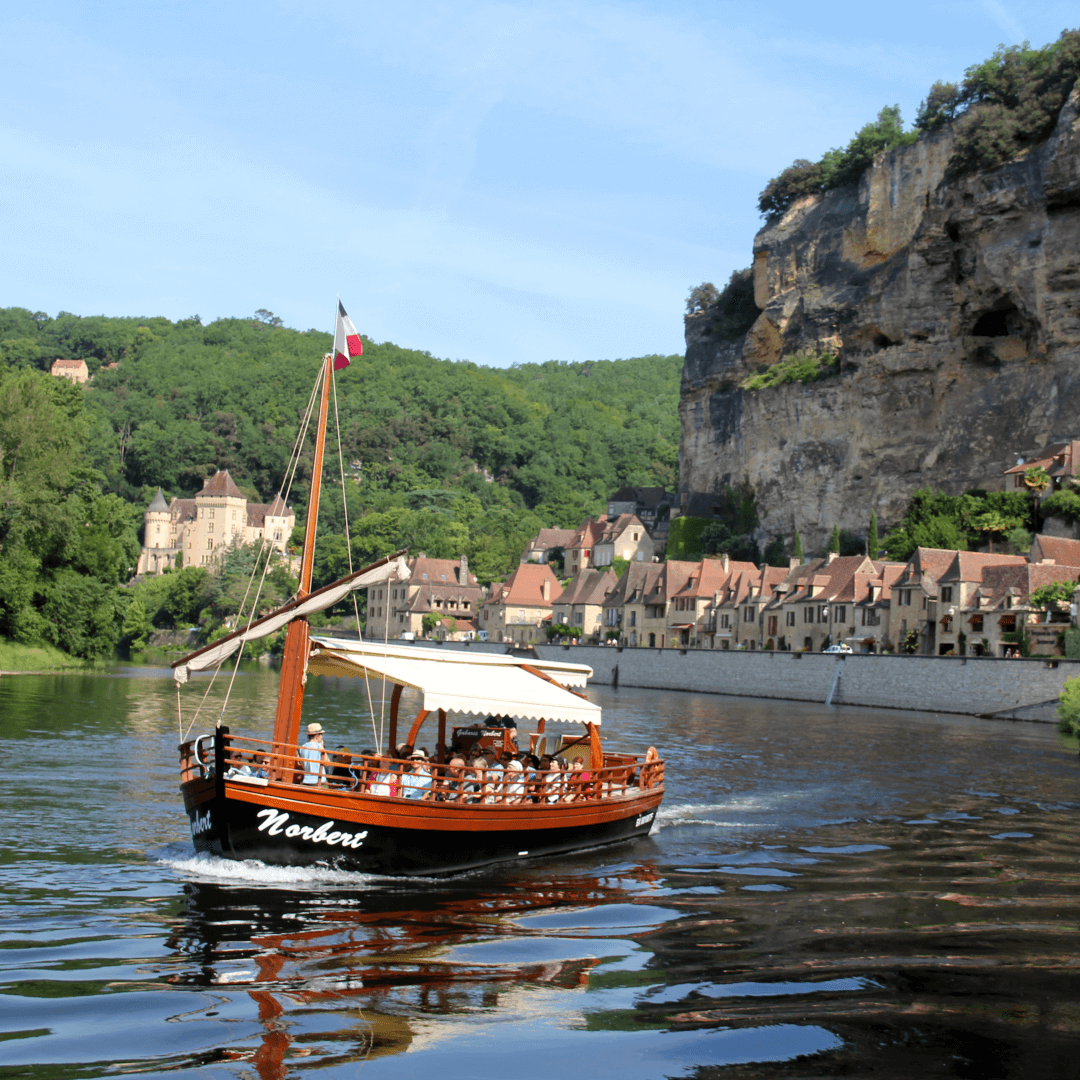 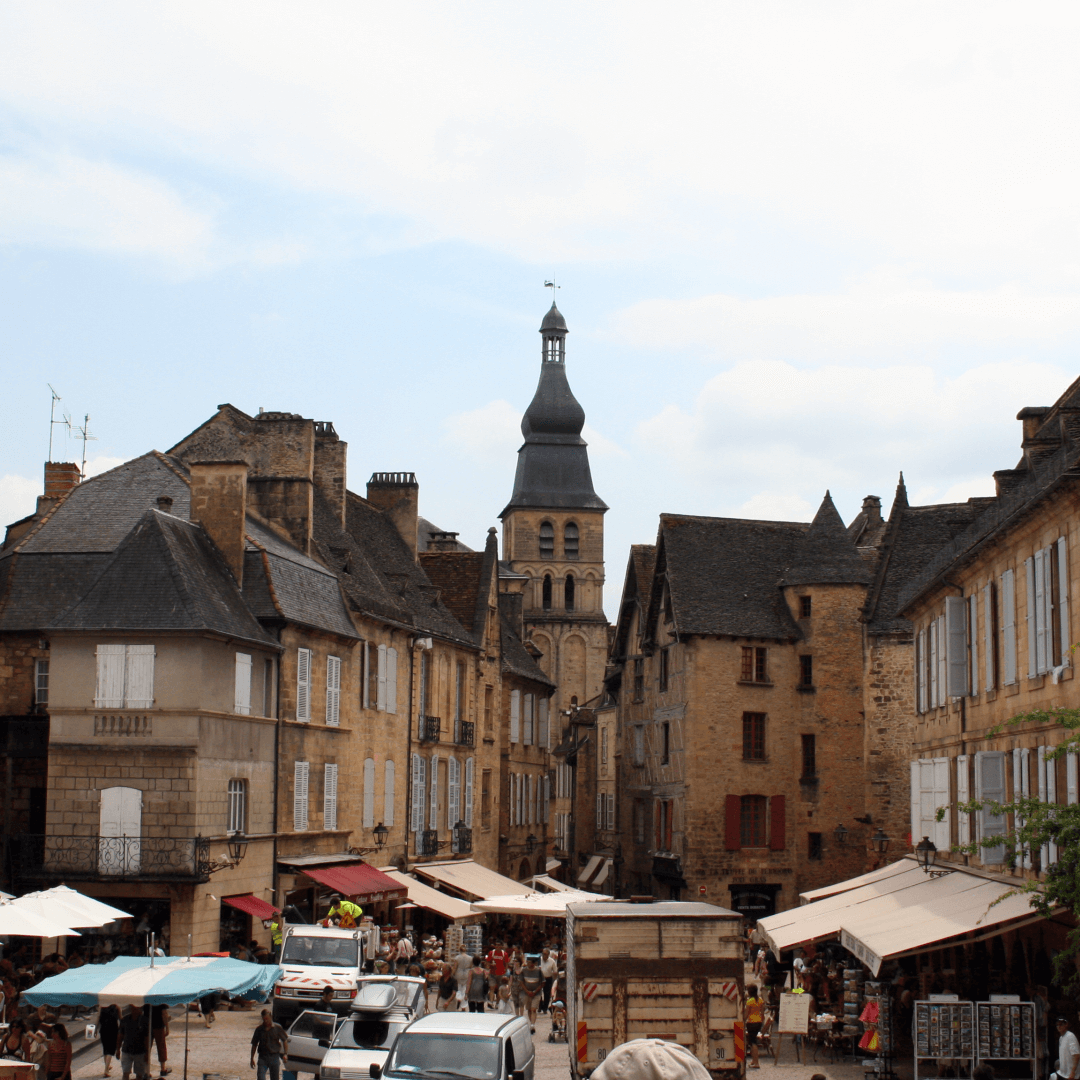 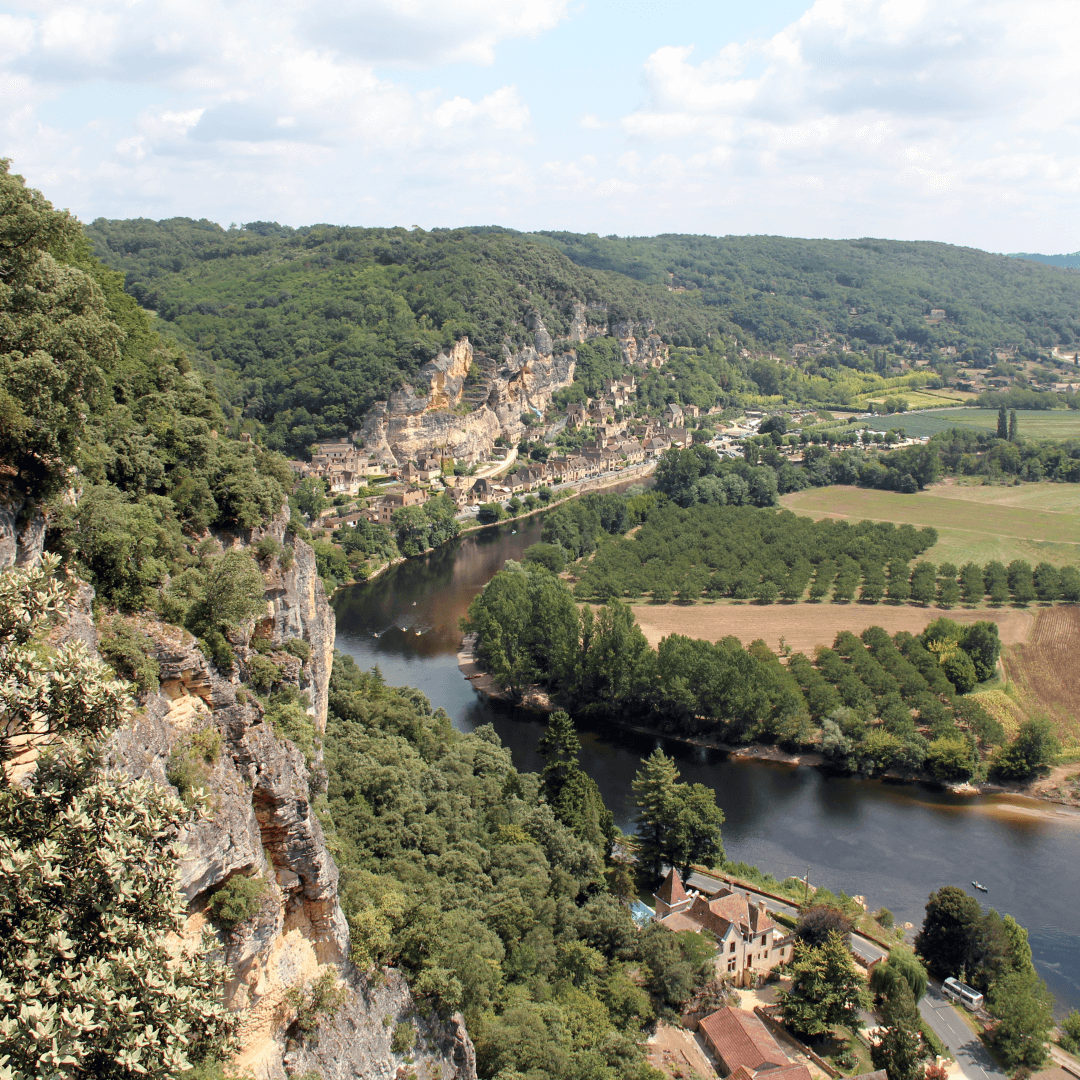 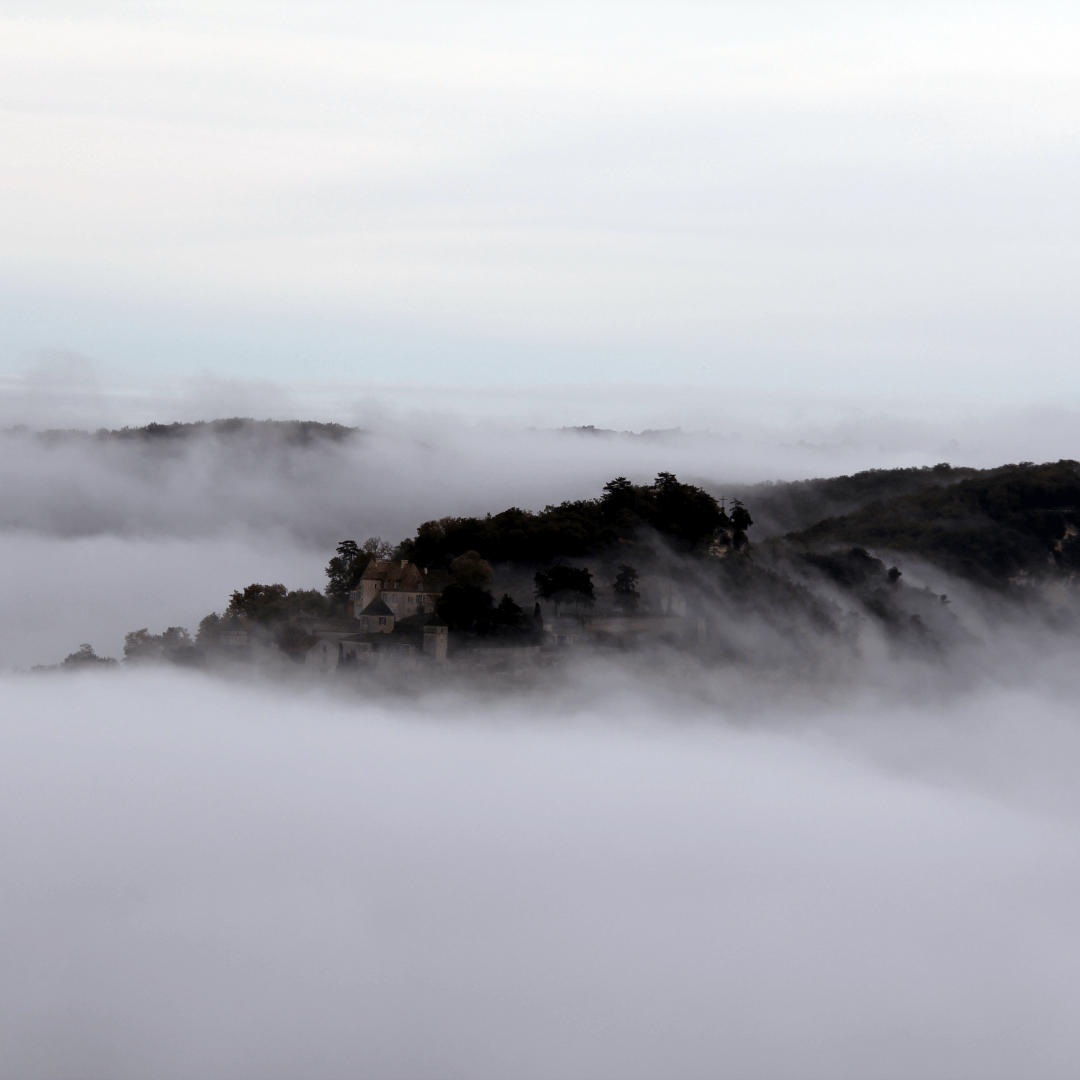 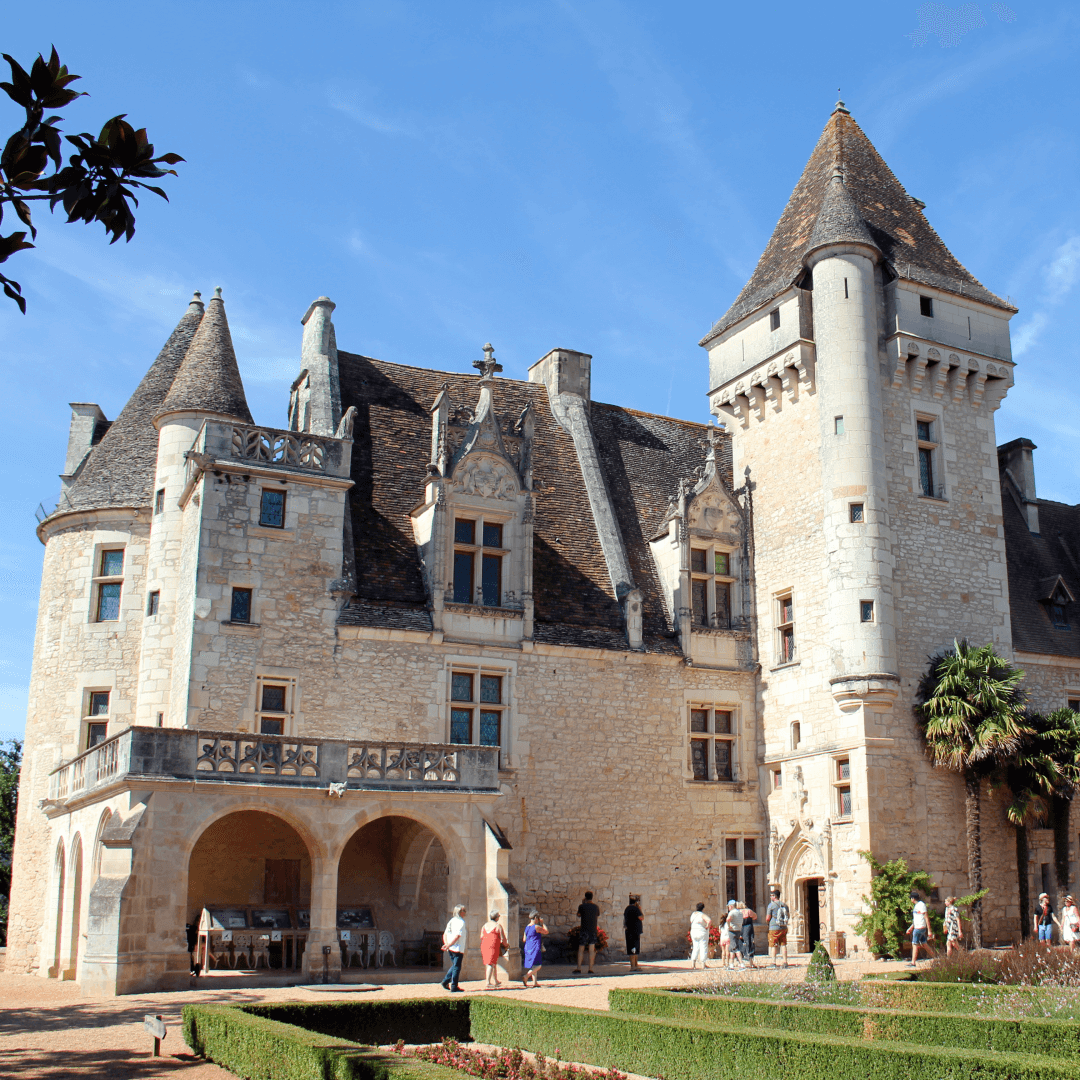 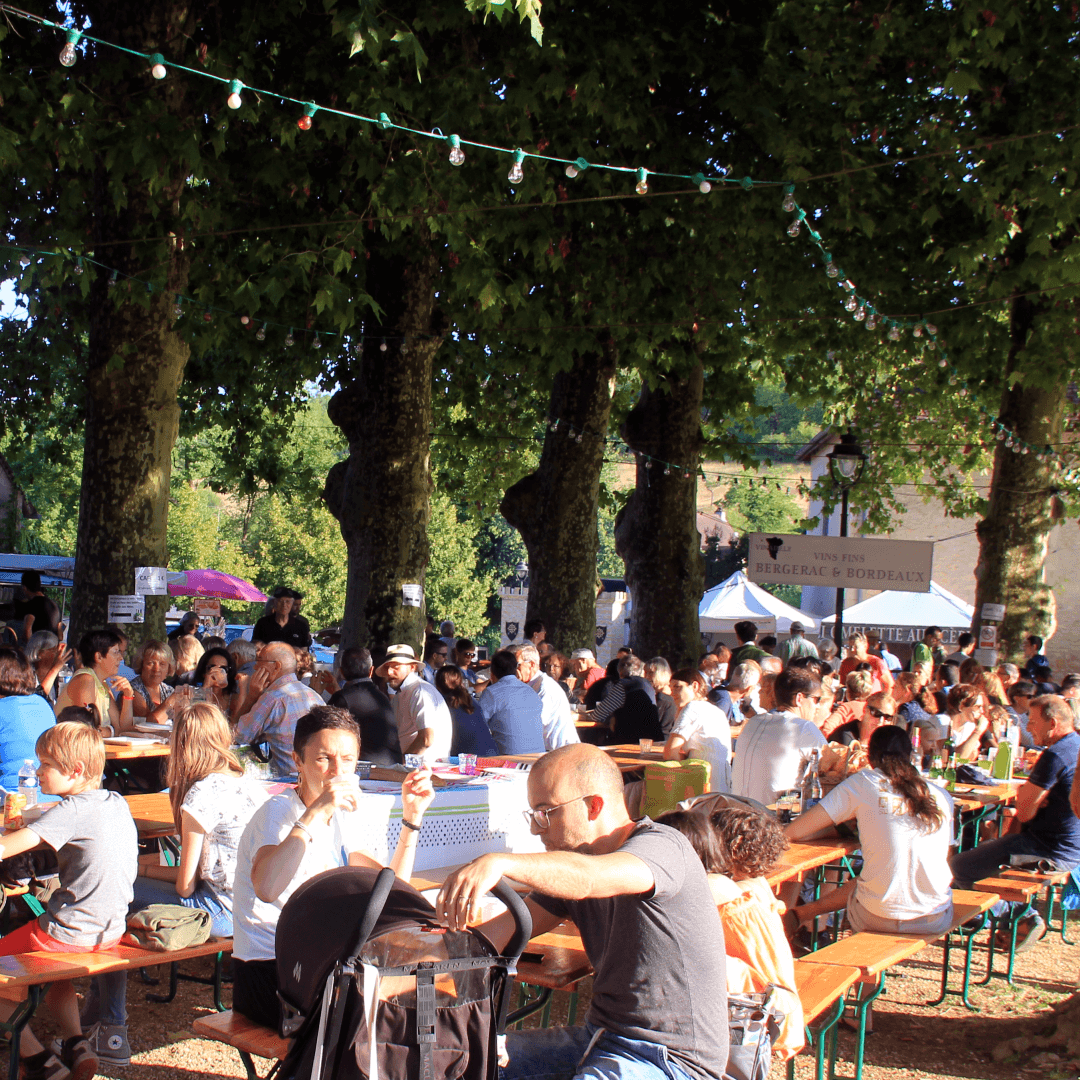 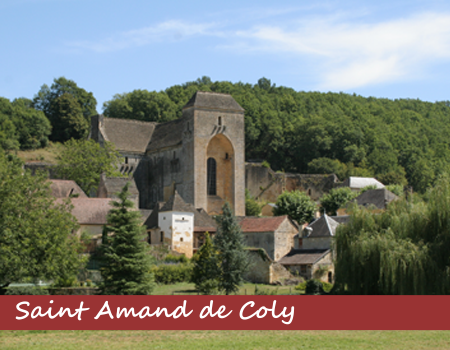 A number of picturesque villages are within a half-an-hour drive of Terrasson in the general direction of Sarlat; explore La Cassagne, Saint-Amand-de-Coly or Saint Geniès, pass a few hours in the gardens of the Manoir d'Eyrignac before spending the afternoon in the enchanting Sarlat. 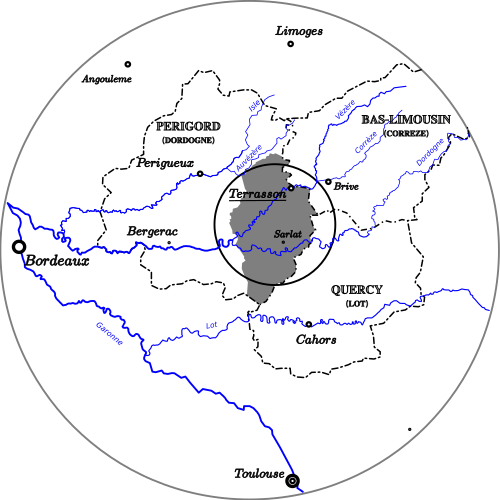 Driving from Sarlat to the Dordogne river we pass some spectacular landscapes composed of the river, old towns and castles. Choose to explore some of France's 'most beautiful villages': Beynac, La-Roque-Gageac or Domme. A river cruise on board one of the Gabarres is a must, visit the gardens of Marqueyssac and walk the 'Via Ferrate' during summer. 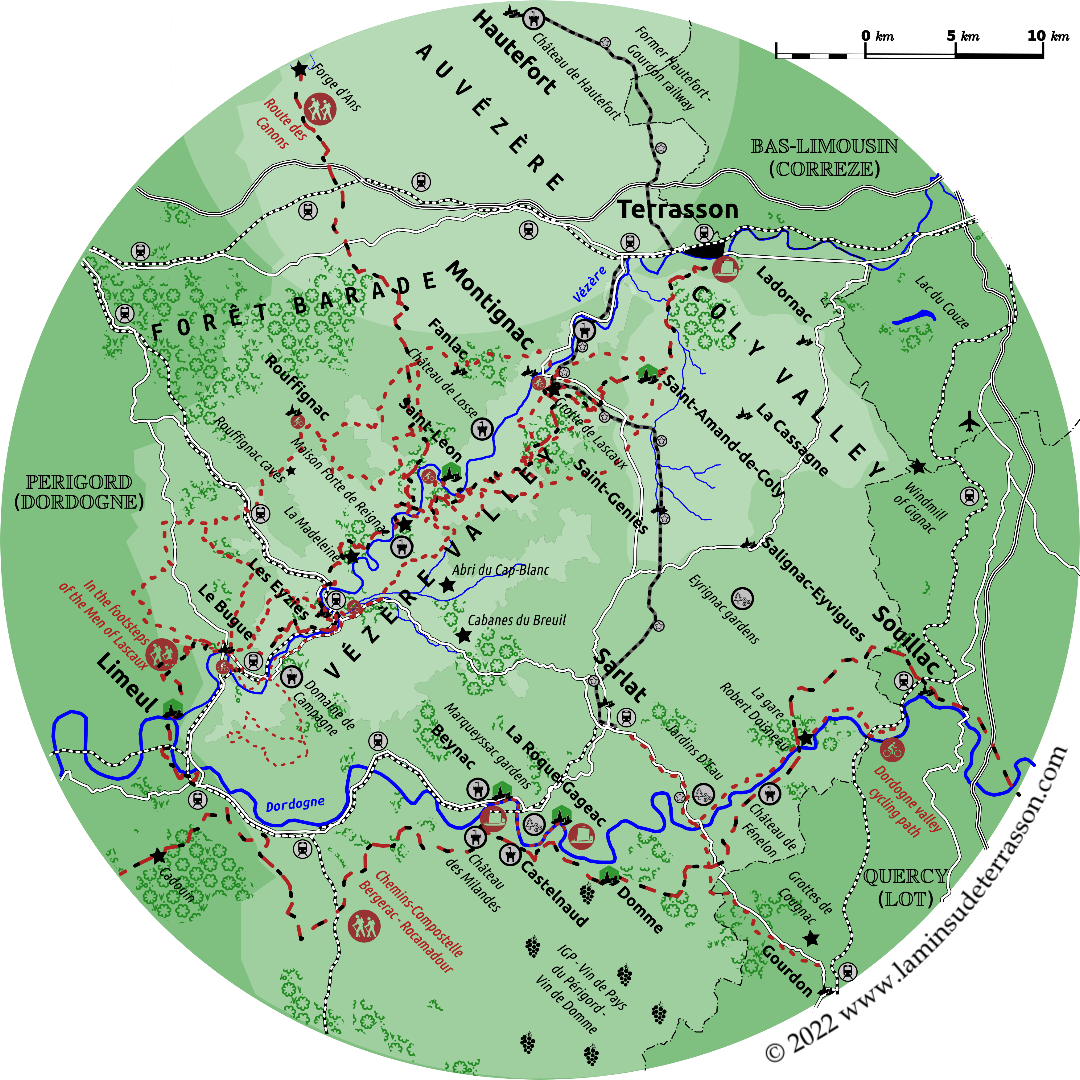 The Perigord noir's capital, Sarlat was a prosperous town throughout the XVI, XVII and XVIII centuries. After that, being too far removed from the main stream, it became kind of a sleeping beauty falling into lethargy for nearly 150 years, woke up again only some thirty years ago. Because modern history has largely passed it by, Sarlat has remained preserved as one of the towns most representative of 14th century France. It is on France's Tentative List for future nomination as a UNESCO World Heritage site.

Although a visit to Sarlat is really all about strolling the medieval alleys and courtyards, the Manoir de Gisson next to the covered market is worth a visit. You walk back into the 17th century in this beautifully restored and furnished home of the local bourgeoisie complete with kitchen, salons and curiosity cabinet. (Entrance fee )

A small commune at the edge of the Coly watershed in a well preserved landscape, with the XIVth century Church, and XVth century presbytery at the heart. La Cassagne has a 1.7 km-walk passing the bourg with its 13th century barn marking the presence of the Knight Templars, several pigeonniers, the gleigier path (trail followed to walk to the church) and an interesting covered well that was still used as a source of drinking water and washing place as recently as 1981.

The village is named after Saint Amand who was a hermit living in a hillside cave in the 6th century. The abbey church dates back to the 12th century and next to the church are the abbey remains. In the 14th century the church was converted into a fortress but despite its additional defenses it remains a beautiful Romanesque church with simple lines and a simple interior. Its defenses include very thick walls, holes for archers and several blind staircases built to mislead attackers into running into stairs that lead to a dead end.

Attractive village with a number of historic buildings notably the remnants of the 12th century 'old castle', the 16th century 'new castle', the Notre-Dame de l'Assomption church, with its impressive lauze (natural stone) roof, and on the hill the 14th century Cheylat chapel with its frescoes. A little stream supports the old washing place and some duck ponds below the village.

The Manor house is a beautiful 17th century building constructed in the local golden stone with a slate roof. It has a charming graveled courtyard flanked by two smaller stone buildings also in yellow natural stone with tall slate roofs. Les Jardins d'Eyrignac is a topiary garden on a huge scale. Begun in the 18th century the gardens were inspired by the Italian gardens popular at the time. Covering many hectares the garden is roughly split into 5 main areas known: the Box Labyrinth; the Plant Sculptures Kingdom; the Manor and French garden; Capucine's gardens and the White Garden and Flower Meadow. The gardens have been classified as a 'Jardin Remarquable'.(Entrance fee) 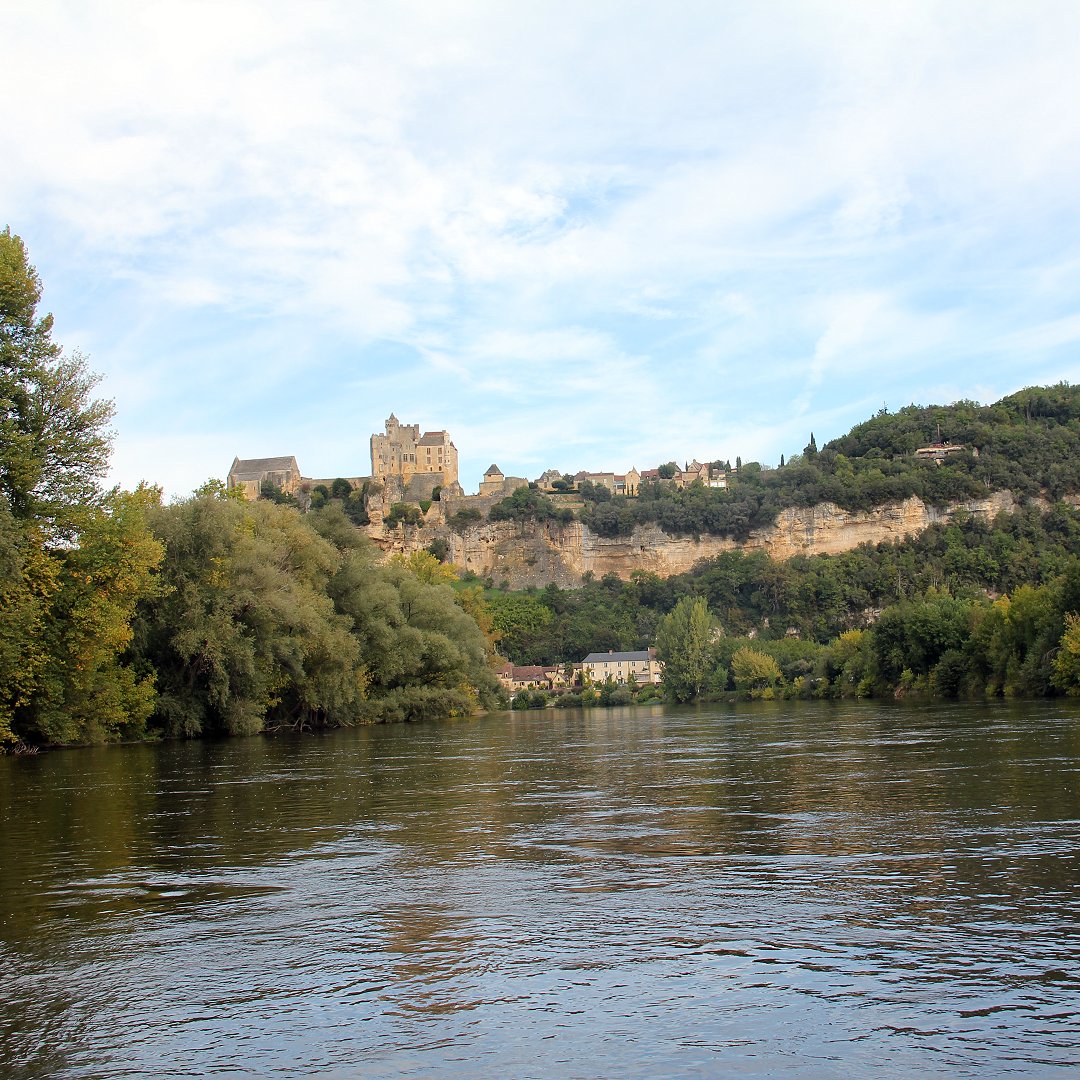 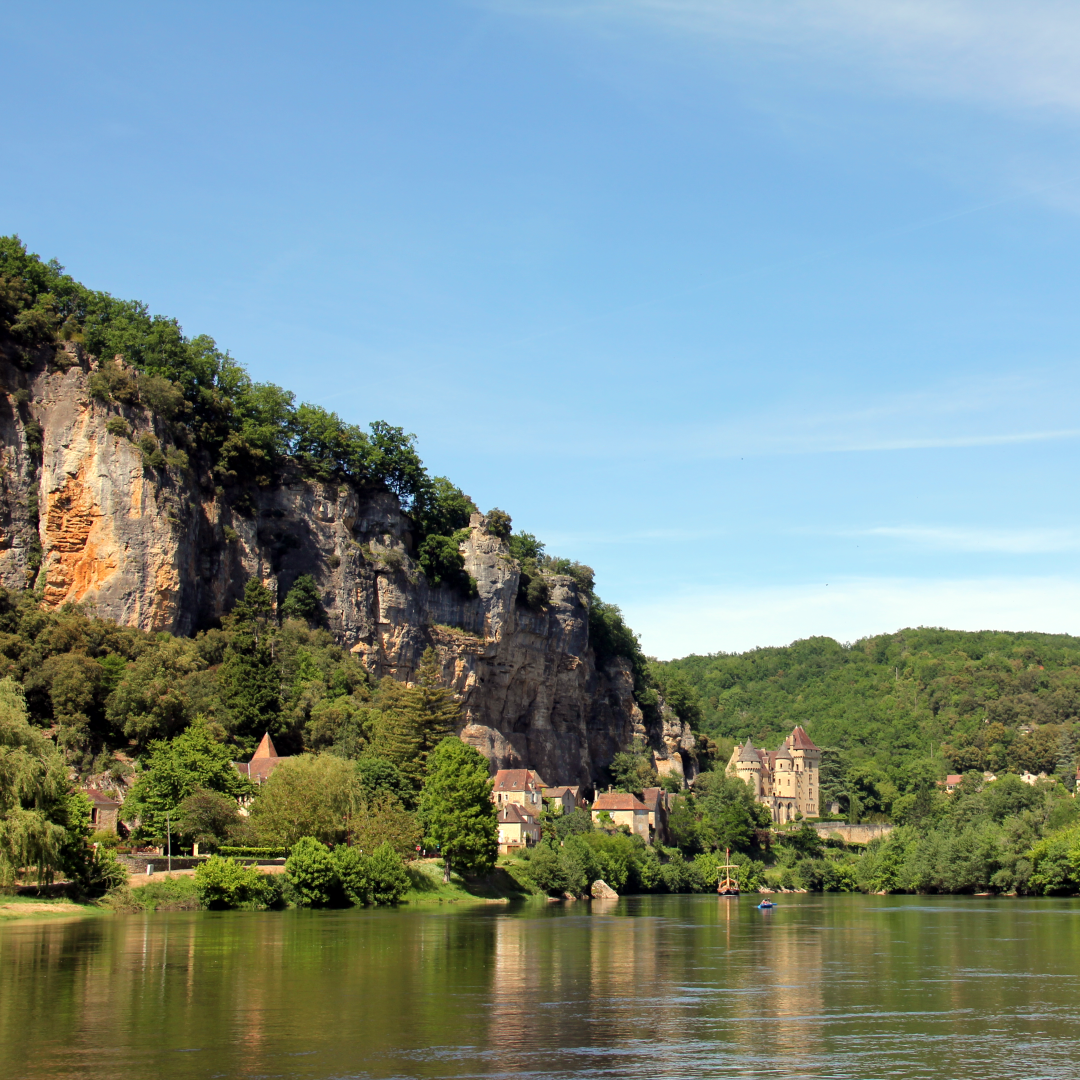 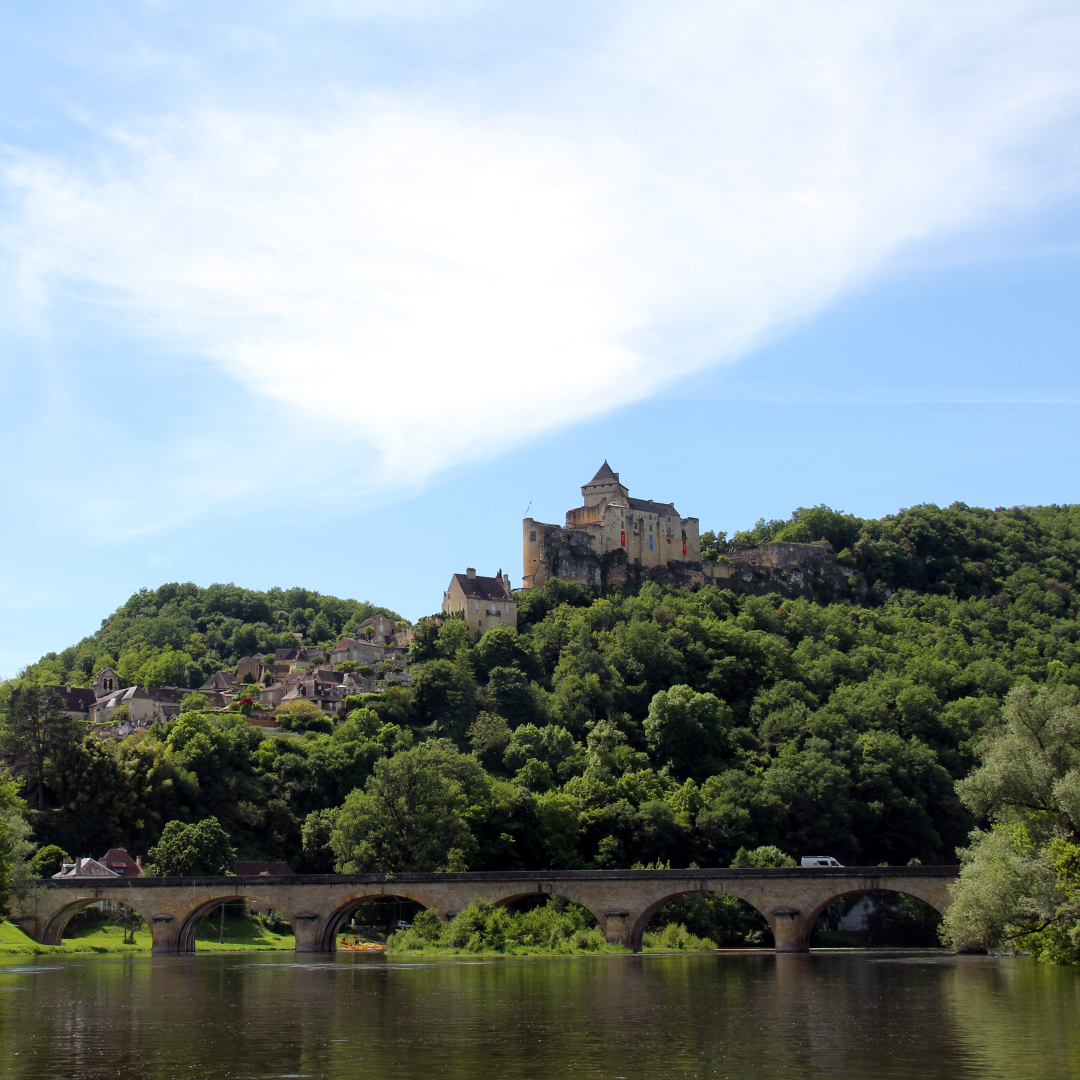 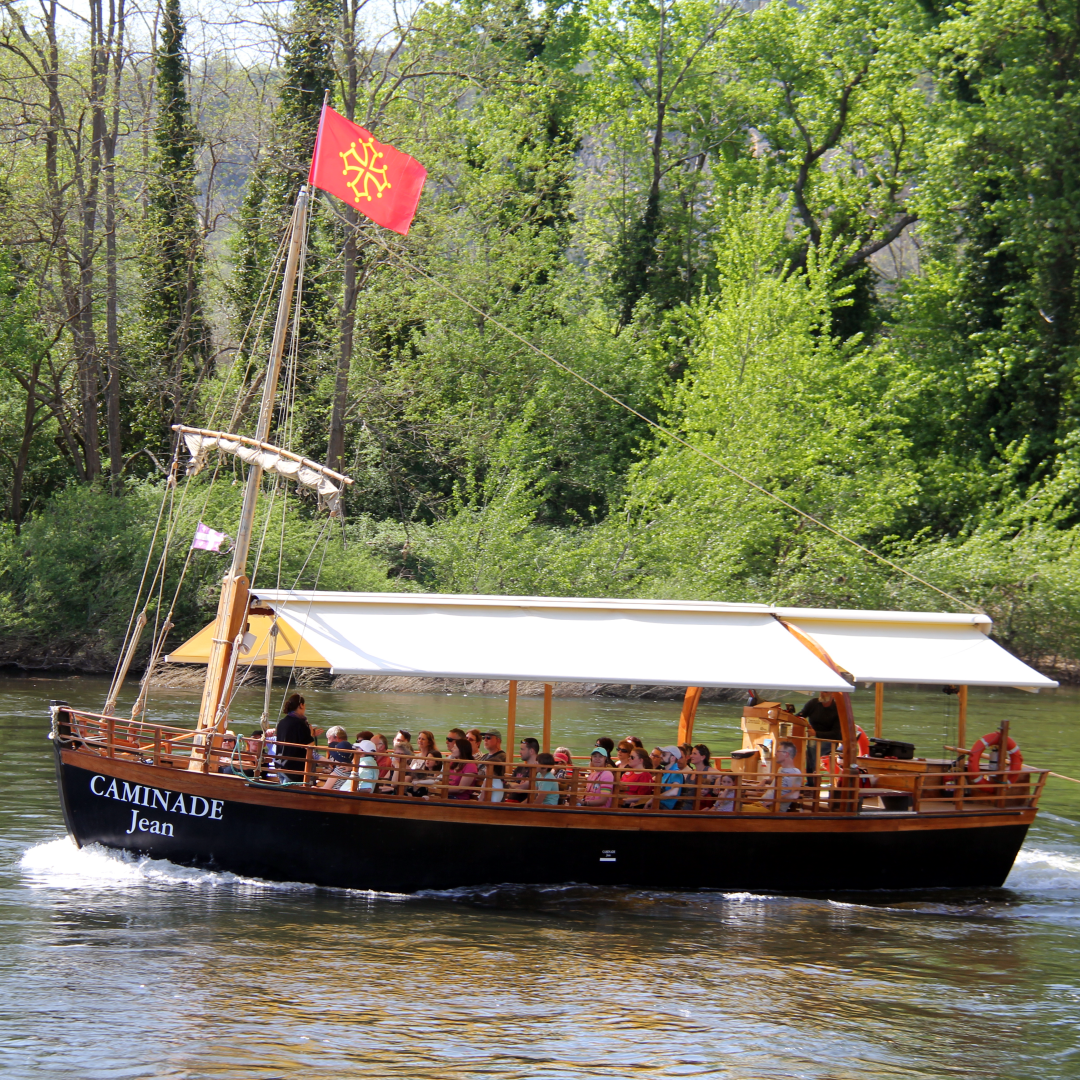 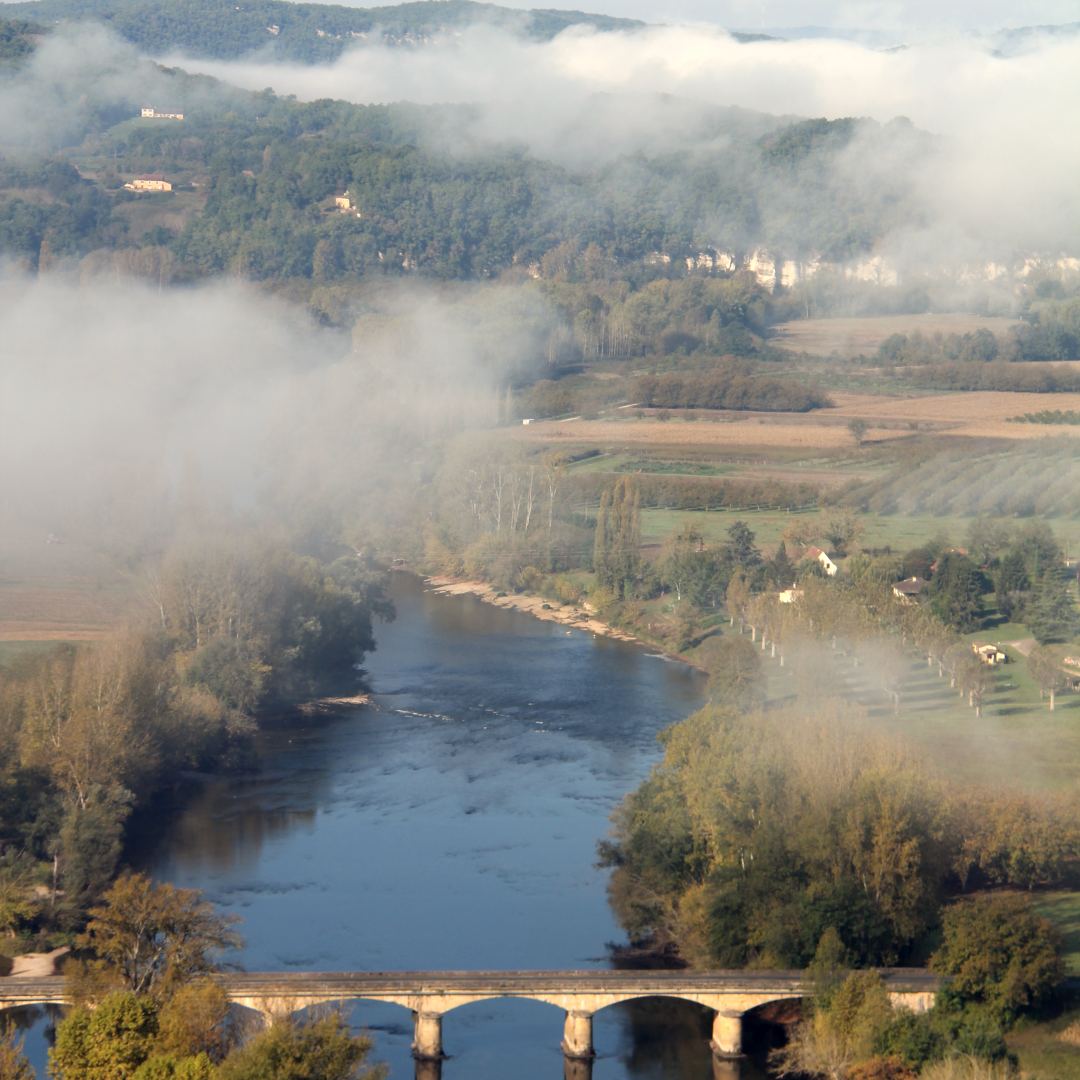 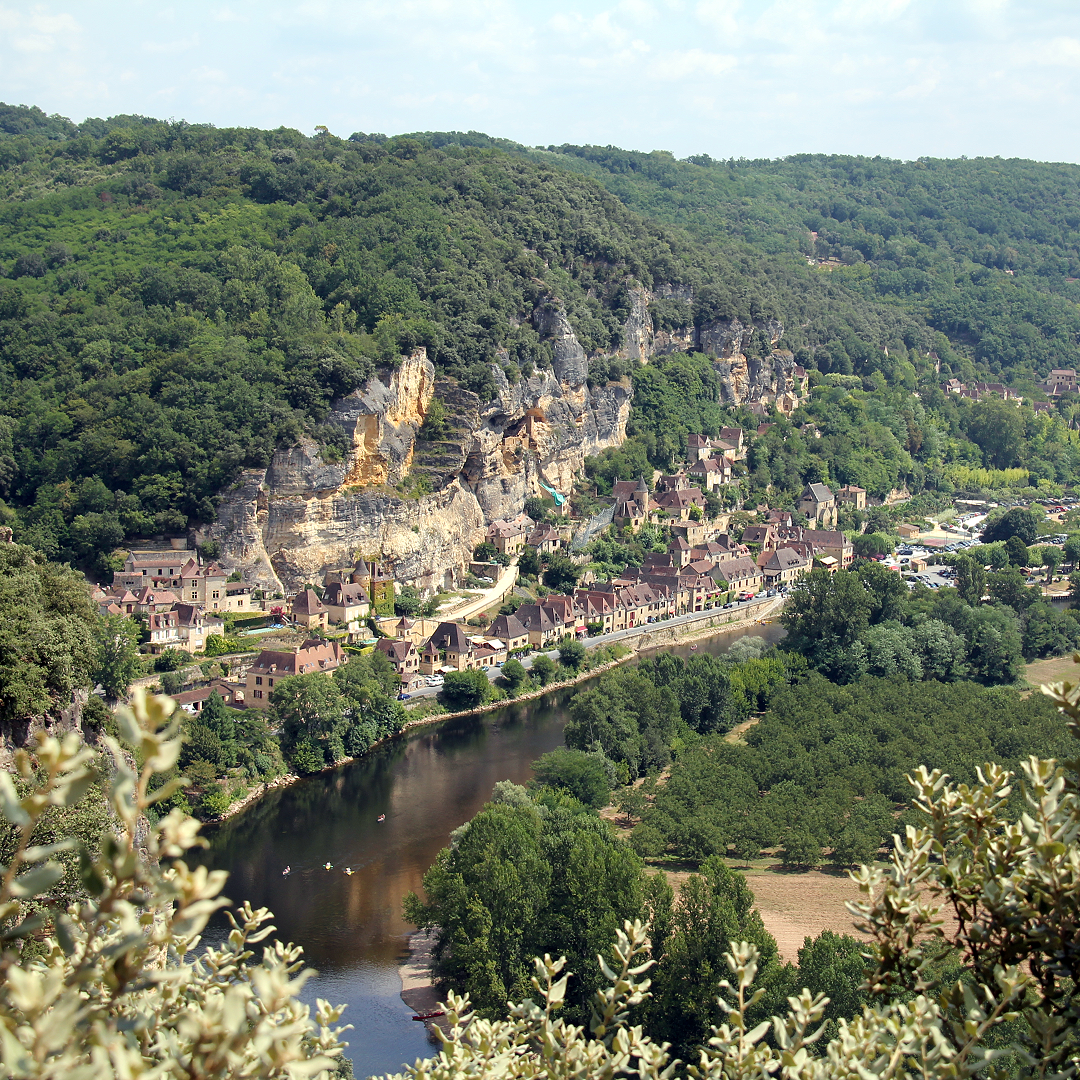 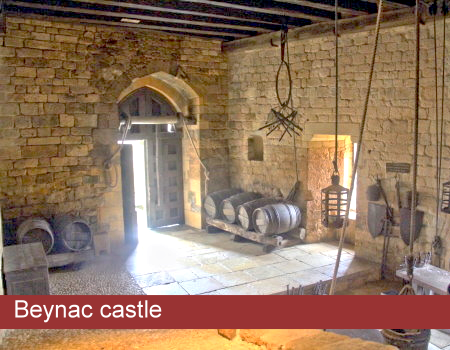 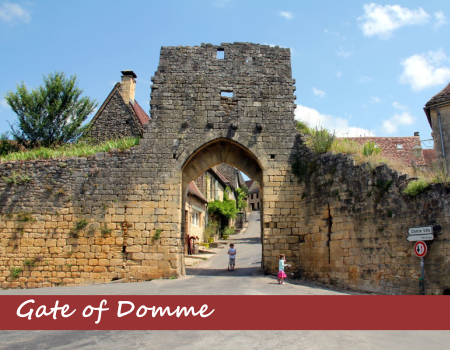 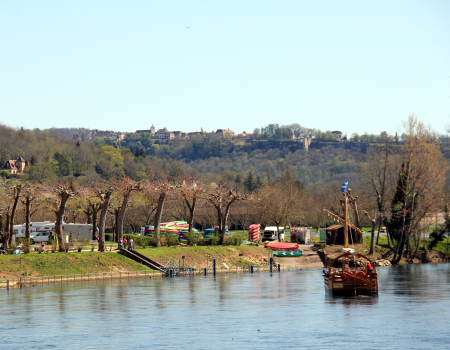 Easily our favourite castle, on top of a 150 meters high cliff, overlooking the Dordogne Valley and the beautifull village of Beynac, the castle is one of the best-preserved and best known examples of feodal architecture in the region.

The castle was built in the 12th century by the barons of Beynac (one of the four baronies of Périgord) to close the valley. The sheer cliff face being sufficient to discourage any assault from that side, the defences were built up on the plateau: double crenellated walls, double moats, one of which was a deepened natural ravine.

Beynac has a Gabarres cruise, offering a stunning view of the rock, village and castle, though the total experience of the ones at La Roque Gageac does have our preference.

The most visited castle of France, Castelnaud is strategically positioned to overlook the Dordogne river, with a magnificent panorama over Beynac, Marqueyssac and La Roque-Gageac. Today a major tourist attraction, it houses a museum of warfare with an interesting collection of arms and armory, and in summer demonstrations by dressed characters.

La Roque-Gageac, a village listed among the 'Most Beautif'ul Villages of France, is nestled between the cliffside and the Dordogne River. Its southern exposure provides it with a virtually Mediterranean microclimate.

The white and ochre façades of its houses align along the bank of the river. A number of winding lanes lead to the foot of the cliffside, offering a magnificent view over the river and you will discover the Manoir de Tarde, a Renaissance manor that still overlooks the heart of the village.

Somewhat 'gentrified' it offers a choice of restaurants and is the embarcation point for the famous Gabarres.

The gardens of Marqueyssac are listed as a National Historical Monument. The 'hanging gardens' are located on the top of plateau, forming an 'island' in the sky. At a 130 meters above the Dordogne river it offers great vistas of the surrounding landscape, with views in all directions covering Beynac, Castelnaud and La Roque-Gageac . The original manor was build in the years before the revolution and supports a lauze (dry stacked natural stone) roof.

During summer (July - August) the 'Via Ferrata' allows you to gear-up and cross the cliffside, 200 meters up and 'alone with the birds' (with a security line and harness).

This natural stone "bastide" or fortified village is perched on a cliff that provides an exceptional view of the Dordogne valley and the neighbouring 'Most Beautiful Villages' of La Roque-Gageac and Beynac-et-Cazenac.

A stroll through the village combines architectural, natural and gastronomic heritage, including the 'Templars’ Tower'. The actual site were the Knights Templars arrested by the king of France in 1307. It is still possible to see the engravings they carved whilst they were imprisoned and awaiting trial. An episode conveniently absent in Dan Brown's ‘Da Vinci Code', still keeps other treasure seekers guessing.